KEYC - Hermann the German's Footprint On Display in New Ulm

Hermann the German's Footprint On Display in New Ulm 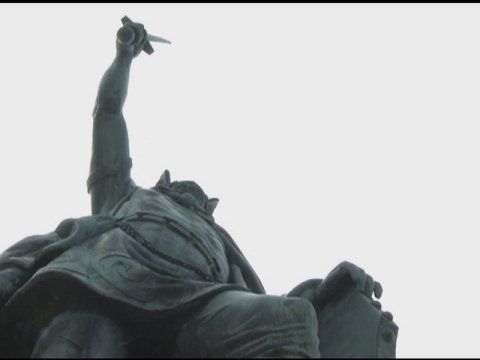 When it comes to ways to talk up their town, there are few cities in the state, if not the country, that can compare to New Ulm, in both zeal... and originality.

Look what they dug up now.

An actual footprint from Hermann the German, the legendary Teutonic knight that has been the symbol of New Ulm for decades.

Of course it's not an actual footprint, but yet another tourist trap for the famously German city.

Though the story received a bit of attention from other media outlets, who took the idea of a 25-foot tall German warrior somehow making his mark two thousand years ago, some four thousand miles away in a basement a bit too seriously... but nobody's perfect.

Terry Sveine with the New Ulm Visitor's Bureau says, "The story is that we found it in the basement. It's Hermann's footprint, but we don't' know where it came from. Why is it here? Our question to people is do you have any thoughts on where it might have come from."

The footprints' claim to fame going forward: Give it a touch, and the rest of the day will be fun.

It's part of New Ulm's "Germans Have More Fun" campaign, hoping to get people into town, especially with Oktoberfest and all its warm-up festivals right around the corner.

They're even hoping people will visit their facebook page, and make up their own origin story for the hero of New Ulm... though you still have to touch it for good luck.

Sveine says, "You know this may not be real, but you buy into it and hope it'll give you good luck. We hope they'll buy into this concept of touching it and having more fun."